Although we didn’t have any snow in 2011, that didn’t stop the back garden being transformed into a winter wonderland. In 2011 we added quite a few new sets here and there to the display and lit up a single tree supported with a few new blow mould figures passed down from a fellow decorator in the front garden…have a look below!

You can see and read more about the new blow moulds that I am talking about in the 2012 page. 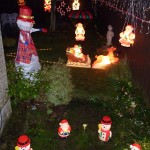 A zoomed in shot of the back garden display in 2011 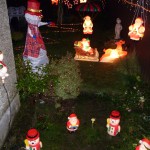 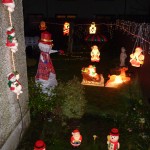 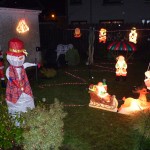 This picture shows the garage which we also light up. The Rope Light Bells were the first rope light figures that we owned